Mountains inspire opposing feelings. Feelings of being tall and small simultaneously. Ego can reveal itself while mountaineering and in my experience, any extreme sport for that matter.  In contrast, there are also opportunities to become vulnerable, trekking on the outside of our comfort zone.  How do you find balance when there is so much going on externally and internally when attempting an unknown summit (Direction, safety, maslow’s hierarchy of needs, beauty and nature, photos, meeting like-minded folks,etc)?

In the last 10 years, I’ve finally started to realize while summiting and not summiting, I’ve become a risk manager. Although my parents describe my brother (we go on a lot of hikes together) and I as risk takers.  We are aware of the risks, but we push ourselves anyway. The stories about having to bail out on a hike, I believe are my favorite stories. The last time this happened that I couldn’t see my hand in front of my face because it was blizzarding so hard.(Last year, December 22nd on Pikes peak). My brother is born on the winter solstice and he always plans a “death march” as he calls it. This year we just went camping and stayed up to watch the meteor shower! Everyone thought we were nuts when packing up the car and it being snowing and freezing outside. We got to Penitente Canyon, presently a beautiful popular climbing spot with American Indian petroglyphs and Virgin of Guadalupe painted high on a canyon wall left there by Los Hermanos Penitentes, a Spanish religious sect that favored Penitente Canyon for its solace in the 1880s. This is how the canyon got its name.  Anyway, it was like the heavens opened up, the sky was clear, and it really wasn’t that cold (-4 degrees).

The last major trekking trip I went on was to hike two 14ers in the same weekend… Wetterhorn (class 3) and Handies (class 1) with my best friend Nikki.  Needless to say we rocked it on Wetterhorn, on the top it got sketchy. In fact a gentlemen, thank goodness for him, caught us going up the class 4 route. He said “where are you guys going.” And I was like” uh, to the top!” On the right trail we approached the top by climbing up a steep wall, definitely stepping/crawling outside our comfort zone.  At the top we took real selfies of our bare butts.

The next day we had planned to do our first sunrise summit on Handies peak, a considerably shorter hike than Wetterhorn.  We got lost in the dark, took a wrong turn and felt pretty dumb.  We couldn’t bag an easy class one … whoops!  The sunrise was gorgeous, we were safe and we were still very high up.  You never know exactly what will happen in life as mountaineers and risk managers but we are aware of the outcomes. Keep pushing your comfort zone but know when to bail. Also, learn how to read a map, bring one, know where you’re going!  Understanding your ability and what your level of acceptable risk is, is an important first step before heading out on your next adventure.

MK is an Art Educator, Yogi, Colorado Native, Snowboard Instructor in the winter and Raft Guide in the summer. On her free days she is often travelling, trekking, camping, backpacking, taking a walk with hippopotamus (a special brown dog) hot springing, and all the outdoor things.  In the summer months you’ll find her in a foreign country or living in her 1970 red VW van down by the river!

Every few weeks we realize that our list of short term adventures is beginning to run out and we have to sit down to plan the next dozen.  I always schedule a fall hike because well it’s the best time of year.  The bugs are not as nagging, the nights are cool and the views are stunning!  This year instead of adventuring in one of our usual north east locations we decided to use up a few of those airline miles that were burning a hole in our pockets and head to Colorado.

The trip included myself, Poria (my trail wife, ha), and his questionable friend. It’s not that I question whether or not Poria was friends with him but more the decisions that his friend made.  That being said, once you generally understand him and his decisions begin to make more sense the more you’re around him.

Since we booked for early October we knew every destination was dependant upon the weather.  Snow on top of a 14er was a real concern for some of the more challenging routes.  We also tossed around the idea of visiting a backcountry hot spring, sand dunes, and squeezing in some rock climbing.  As the date got closer snow started to alter our decisions more and more.  Luckily I stumbled across an invaluable resource, 14ers.com.  To add a boat load of luck into the mix, they were having a meet up during the same time we were scheduled to head out there.  Snow basically cleared up in the San Juan wilderness (location of the meet-up) and options really opened up. 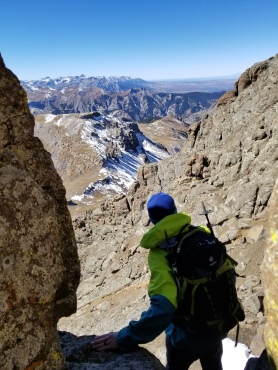 We landed and drove through the night to Lake City, which didn’t feel much like a city, but did have the nicest people I have ever met in my life.  We snacked on what little food we had and headed up our first CO 14er, Wetterhorn.  Yes… we went from sea level to 14K+ with little sleep and little food.  Yes… we know it wasn’t the best idea, but we did take our time and planned to turn around if anyone had bad altitude sickness.  The trek was beautiful and we met some awesome locals.  All in all- a huge success.

On day two, we decided we take the advice of our new friends and bagged Redcloud and Sunshine Peak.  The wind was tremendous but thankfully there were only a few clouds in the sky.  Due to a late start we ended up hitting Redcloud much later than we had hoped to but both the weather report and the sky said we’d have clear skies for the remainder of the day so we pushed on.  Instead of backtracking, we followed the route on 14ers.com into the bowl on the North West side of Sunshine. and back to the trail head.

The snow rolled in early on day 3 and we drove slowly back to Denver for a city day, which is out of our norm but there wasn’t enough snow to play in and there was too much to summit in without proper gear.  The city day included an escape room which proved to be intensely exciting.

On the last day we headed up to Boulder and Eldorado Spring to hike and hang out before shipping back home.  This trip was much different from our normal fall backpacking but hey… different is good!

I have been backpacking on and off for over 15 years. Throughout college, it was something we did occasionally but it was when I finished college and started working full time that the trail really began calling me. Backpacking was always my thing and when we became ambassadors for Deuter, doors into the outdoor industry opened up for us.  We now had contacts with other amazing ambassadors from around the country. So, when fellow ambassador Benny Haddad of Sea to Summit Productions put out an open invitation for a mountaineering trek up to the summit of Mt Whitney, it was a quick yes… and then a quick realization that I knew very little about mountaineering. Here are some of steps I took to prepare for this journey.

Those who know me and have gone backpacking with me know that I do everything I can to not be the one the holds everyone up. Immediately after agreeing to take part in the trip, I decided to take a two day beginners mountaineering course to get the basics under my belt. For those in the northeast, New Hampshire’s White Mountains provide the most severe conditions available, so I decided to take my training there. I had to act fast to get my training with an ice axe and crampons while there was still snow available. Google quickly pointed me in the direction of NorthEast Mountaineering, who offers guided services, training and even lodging in their bunk house. 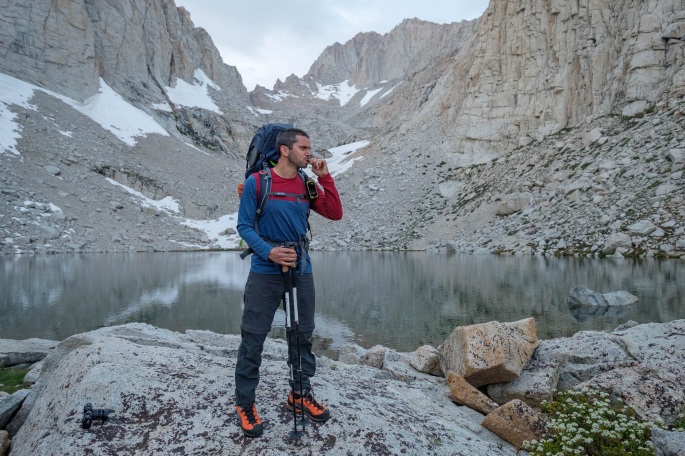 The two day course started off in the Bunk House with how to dress and pack for a cold weather expedition which I was mostly familiar with and then it moved outside. Outside, they went over proper fitting of the crampons, how to hold and walk with the ice axe, general spacing while walking and how to keep a slow but steady pace. From there, we went over self arrest techniques from multiple positions and different techniques for walking with crampons both up and down the mountain. We skipped the bunk house and decided to camp at a local fire tower. The views were amazing and the 6 miles out and back was worth every step.  Day two went into some more advanced techniques that we probably weren’t going to need for Whitney but it was good to be be opened up to the concepts.  They included repelling, building snow anchors and glacier travel. The course did not disappoint. The basic techniques were reviewed enough times that even five months later, when it came time to climb Whitney, we remembered them well.

My everyday life is lived at around 700 ft elevation, which makes climbing to 14500+ ft a real concern for altitude sickness. From what I’ve read, the only things you can really do to try to avoid it is drink more water and eat more than usual on your trip.  The last tip was to breath faster than normal to increase the oxygen you’re taking in. Aside from learning the basics, I began physical training 6 days a week. Before I started training, I considered myself an active person, but I never exercised. I built myself up to 3 and 6 mile runs. I would do a 3+ mile run on Monday and Wednesday. The 6 mile run took place on Saturday mornings.  On my runs, I would add interval sprints up hills and they try to continue jogging on the flats.  On Tuesday and Thursday I would head out on the mountain bike and try to hit trails with decent climbs to engage different muscles in my legs.  Finally, on Wednesday I hit the gym. I focused more on a circuit style of training that involved push ups, pull ups, weighted step ups (30lbs), squats (30lbs), crunches, planks, supermans, and leg presses. The focus was mostly legs followed by core/back with sets of 20 in each exercise.

You’ll never be able to plan for everything you’re going to experience on the trail but if you put the effort in before hand you can at least feel confident that you will be able to get yourself through the majority of the issues that arise.

Amazing pictures captured on our Mt. Whitney trek by Benny of Sea to Summit Productions.